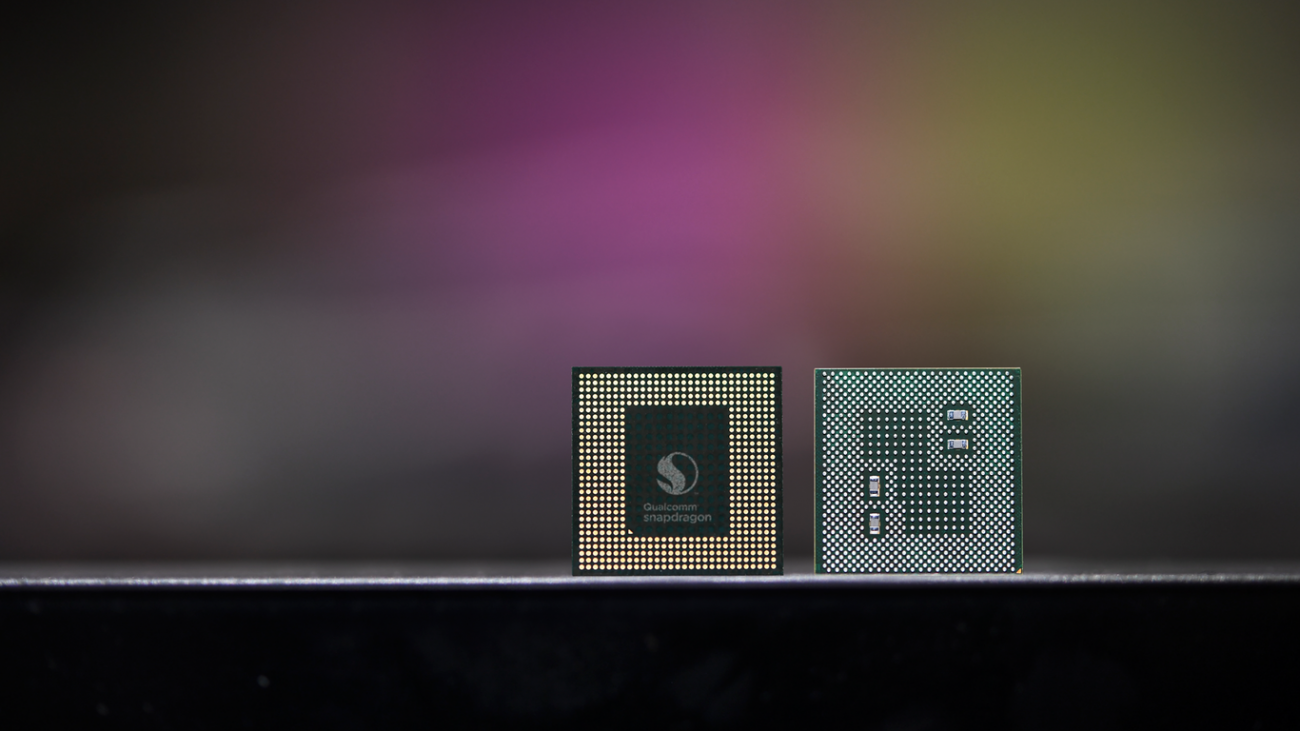 Qualcomm has chosen a most exciting moment to land in the PC market with its Snapdragon platform. And is that when the first convertible and ultralight equipped with this SoC arrive will be forced to face not only the new Ryzen Mobile and Ryzen PRO Mobile that AMD has just presented at CES, but also the first Intel Core equipped with a GPU AMD Radeon RX Vega M.

The data we have collected so far allows us to get an idea of ​​what each of these proposals will bring. Although, of course, we can not take anything for granted until we have the opportunity to thoroughly test the first teams that will have these microprocessors. Of course, we can be sure that this market segment is about to become more animated than we expected very recently. 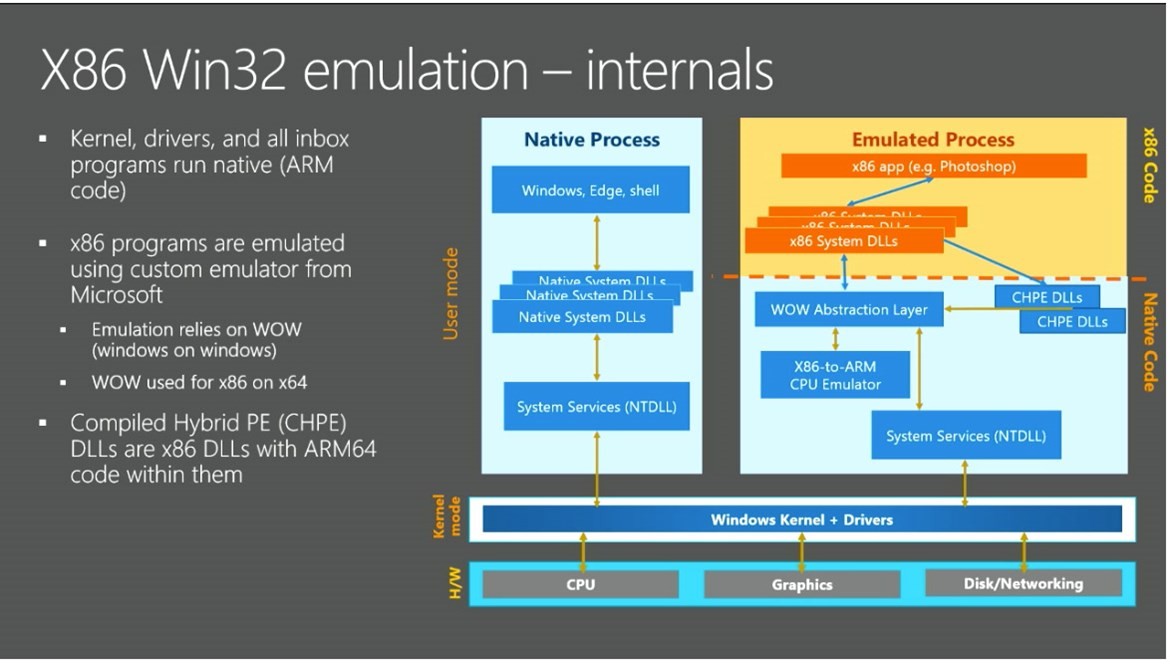 Yes, ARM and Windows 10 get along

And the merit does not belong only to Qualcomm, but also to Microsoft, as we told you in advance. Working together they have achieved that certain Windows 10 components (some of the most important ones, such as the kernel or device drivers) are run natively in the ARM cores of the Snapdragon SoC, while other parts of the operating system and applications x86 are processed using the x86 emulation mode implemented by Microsoft in Windows 10 .

Something that is worth paying attention to, given its relevance, is that Snapdragon computers that incorporate the latter operating system can run both applications built on the UWP platform (Windows Universal Platform), which are specifically designed to run correctly throughout the Windows 10 ecosystem, such as Win32 programs, which are the usual ones, which we have traditionally used in Windows.

In this way, the range of applications that can be run on a SoC Snapdragon and Windows 10 machine is virtually unlimited, which places it in this scenario with equal opportunities compared to computers that include an Intel or AMD x86 microprocessor. 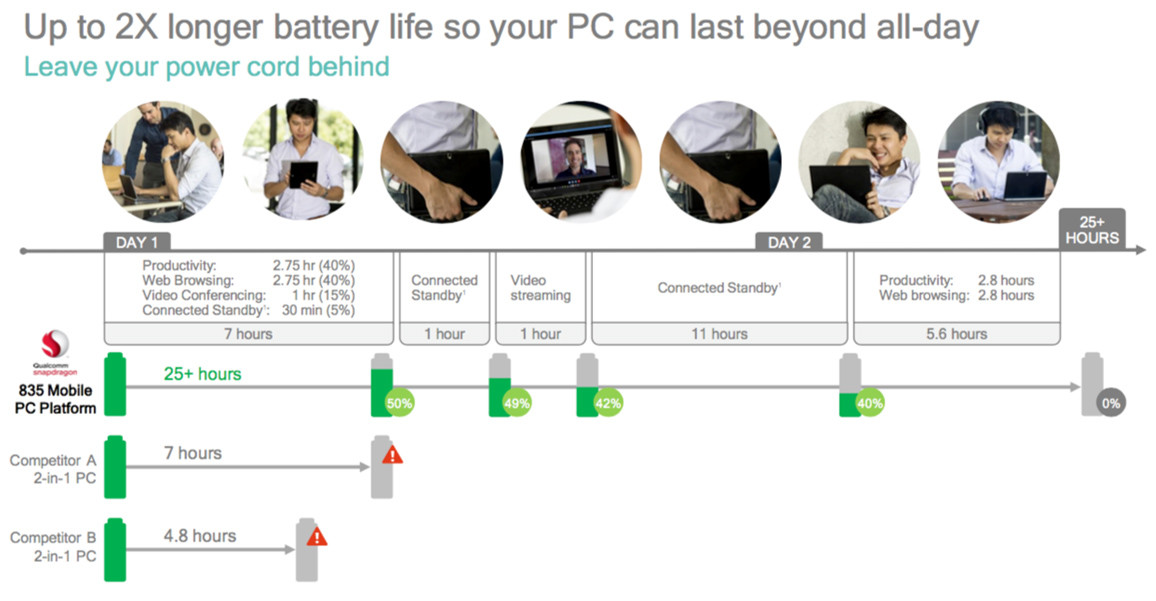 Qualcomm, RISC and an autonomy of up to 25 h

Unlike Intel’s and AMD’s x86 microprocessors, which use a CISC (Complex Instruction Set Computer) architecture, Qualcomm Snapdragons rely on a RISC (Reduced Instruction Set Computer) architecture. The main difference between both design models is that ARM uses a relatively simple set of instructions and therefore, not very extensive, while CISC follows an opposite design philosophy that is characterized by having a very broad set of instructions.

The divergence of these two approaches means that the number of transistors that must be used in the manufacturing process of a RISC microprocessor is significantly lower than that of a CISC chip. Although, logically, the total number of transistors depends not only on the architecture used, but also on other characteristics of each microprocessor, such as the complexity of its micro architecture or the number and size of caches, among other factors.

The constant improvement of integration technologies, or lithography, introduced by microprocessor manufacturers allows the consumption of these chips to be reduced even if the same number of transistors is maintained. But if we compare two chips with different architecture, one CISC and the other RISC, manufactured with the same integration technology and designed to be integrated in the same type of device, the natural thing is that the RISC incorporates a number of transistors much lower than the CISC. 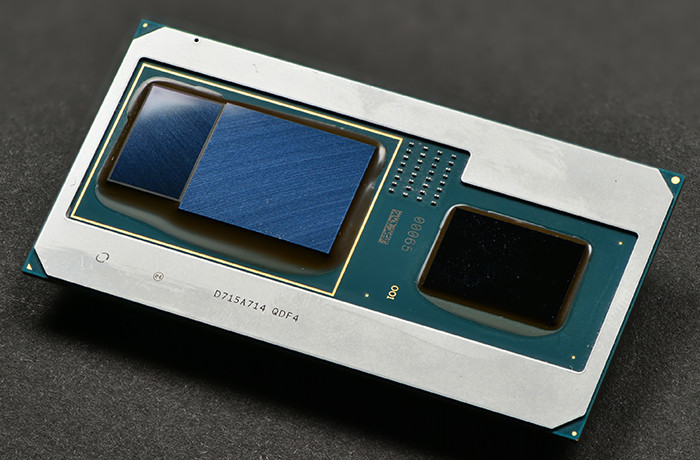 Continue Reading: Intel Core i7-8700K: The king of the processors to play has returned with bestial and hot 5 GHz

The consumption of a microprocessor is largely conditioned by the number of transistors that it incorporates, although there are other features that also contribute in an important way to reduce its consumption, regardless of the architecture it uses. A strategy commonly used by microprocessor designers is, in general terms, to deactivate those functional units and SoC elements that are not being used at a specific time, which obviously contributes to saving energy.

In any case, despite the nuances that we have just reviewed and the different strategies addressed by the processor manufacturers, the most striking thing in the scenario we are dealing with is that SoCs with ARM architecture tend to consume significantly less than those who resort to the CISC architecture. That is why they have been so successful in the market of mobile devices, such as smartphones and tablets.

Qualcomm is fully aware that its Snapdragon chips have this competitive advantage to be compared with the x86 chips of Intel and AMD, so we can expect that their arrival in the market of convertibles and ultralights will give us autonomies much higher than what we are used to But to what extent will they be superior? According to Qualcomm, the teams that incorporate their SoC and Windows 10 will offer us a range of up to 25 hours, although this does not mean that all devices reach this figure.

Even so, it is evident that, if the arrival of the first convertibles and ultralights confirms this promise, the improvement over what we have today in what concerns the autonomy will be very remarkable. It is in this field that Qualcomm has an ace up its sleeve, but we must not overlook that the fact that their SoC consume less energy and dissipate less heat, also has other implications.

To round off all that we have just seen, we can conclude that, on paper, convertibles and ultralights with SoC Snapdragon seem to be very attractive for those users who, above all, need a machine that has the longest possible autonomy. One more note: the Soc Snapdragon 835 incorporates a x16 4G LTE modem and WiFi 802.11ac 2×2 MU-MIMO, so the devices that will have this chip will be the latest in connectivity. 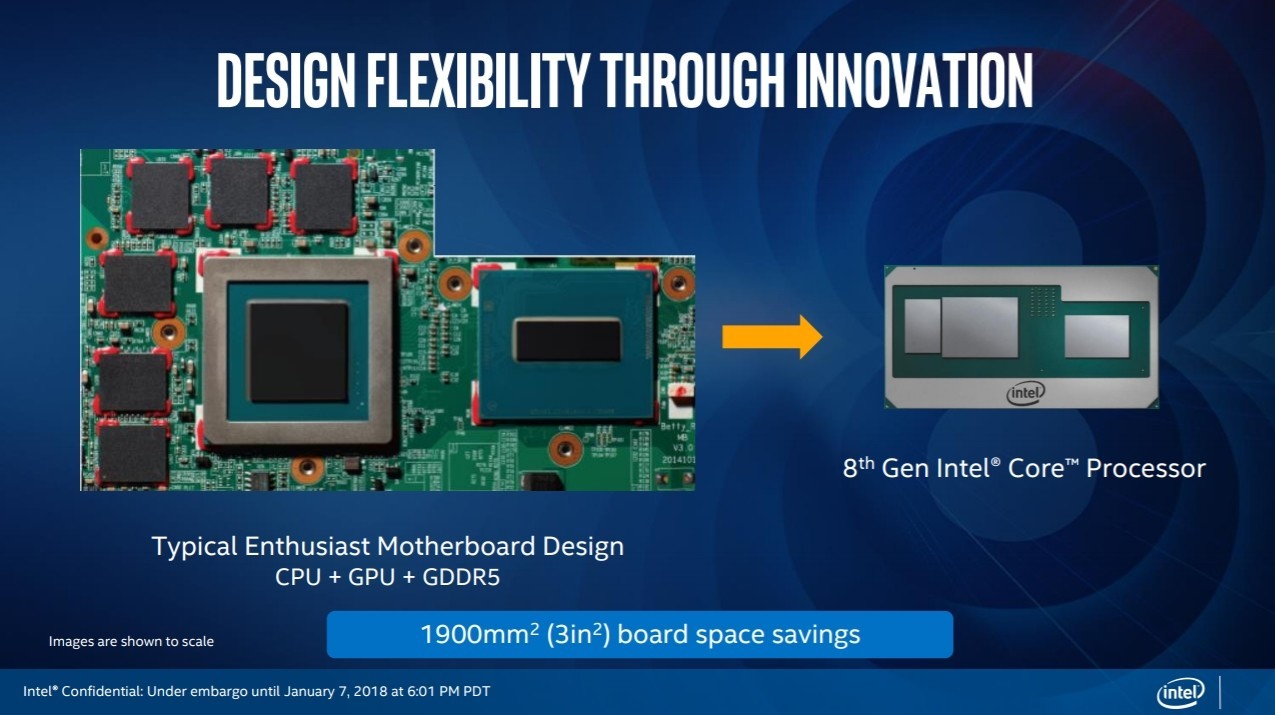 Intel wants to give the chest in performance

Yesterday we told you that Intel and AMD have begun to collaborate to fine-tune the new Intel Core microprocessors with Radeon RX Vega M graphics logic. Its objective is very clear: to place on the market a product capable of combining the performance of an Intel Core i5 or i7 processor with TDP of 45 watts and up to 4.2 GHz, and the power of the Radeon graphics logic, which will oscillate between 2.6 and 3.7 TFLOPS in simple precision operations. There is nothing.

Although these chips have been designed to be integrated into convertibles, conventional laptops, ultralight and mini-PC, it seems unlikely that they can compete in terms of autonomy with similar proposals that will opt for a SoC Snapdragon (we will confirm it as soon as we have the opportunity to analyze in our laboratory the first units of these equipment).

Even so, the new Intel Core with Radeon RX Vega M logic graphics will stand out, of that no doubt, for its overall performance, and, probably, also for a very interesting performance / watt ratio. This means that, on paper, will be consolidated as a very attractive proposal for those users who want to get a convertible or an ultralight whose power, even without rivaling that of a high-end desktop PC or a team for gamers, they guarantee enormous flexibility when running applications.

And it is in the scenario in which it is necessary to resort to one of these teams to run applications of graphic design, photo retouching, infographics, or, simply, games, in which computers equipped with one of these microprocessors should shine.

Of course, a factor that we must not lose sight of is its price. We do not know yet, but it is clear that its acceptance will depend largely on the difference in price between equipment equipped with one of these new microprocessors and its competitors, especially the chips that we will talk about below. 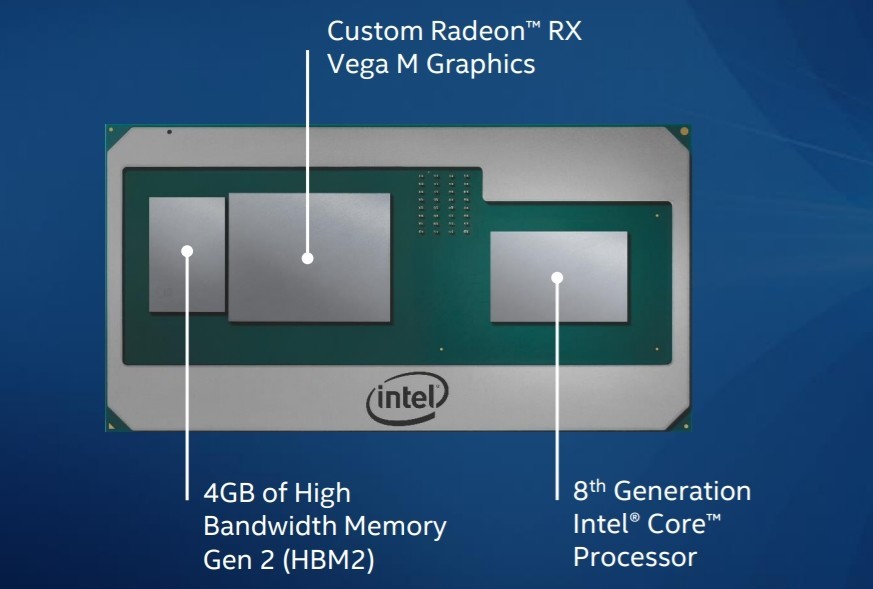 Ryzen Mobile: The bet of AMD

The strategy for 2018 of Qualcomm and Intel in the market of convertibles, ultralight and mini-PC is clearly established, as we have seen. And AMD can not be left behind, something that, obviously, benefits us, the users. And, as we told you a few hours ago, the Sunnyvale company has presented new models of the APU belonging to the Ryzen Mobile and Ryzen PRO Mobile families, which are their proposals for portable consumer equipment, the first, and professionals, the second.

The new APUs represent another step on the part of AMD towards its consolidation in a market in which the first Ryzen Mobile microprocessors proved to be a very solid option. And the future for this company paints very well if we take into account that AMD plans to introduce the lithography of 7 nm in its next Zen 2 and 3, although in principle we will have to wait until 2020 to be able to get a team equipped with one of these APU.

In any case, what interests us now is that the APU Ryzen Mobile and Ryzen PRO Mobile have Radeon Vega graphical logic similar to those that we can find shortly in the teams that opt ​​for Intel Core chips with Radeon RX Vega M logic graphics from here we can conclude that, a priori, they will compete directly in the high-performance convertible and ultraportable market segment, while the teams with SoC Snapdragon should stand out in the equipment segment with very high autonomy.

Everything we have covered in this post can be deduced from the information we have available, and also from our experience with the devices we have tested from these three manufacturers over the past few years. Even so, of course, we can not take anything for granted until the first units of this new generation arrive in our laboratory and we have the opportunity to test them thoroughly.

The first to arrive will probably be the new convertibles Envy x2 from HP and NovaGo from Asus, which Qualcomm and Microsoft unveiled a month ago at the event they celebrated in Hawaii. However, these teams will not incorporate a SoC Snapdragon 845, which, as you know, will be the next top of the range of this firm, but the Snapdragon 835.

Even so, his arrival will be very interesting because it will allow us to anticipate very precisely what the teams that will have the new Snapdragon 845, which, according to Qualcomm, will land at the beginning of the second semester of this year.

On the other hand, it is expected that the first ultralights and convertibles equipped with the new Ryzen Mobile and Ryzen PRO Mobile of AMD will land in the second quarter of 2018, so they will face the first teams with SoC Snapdragon 835, and, shortly after, with the proposals with Snapdragon 845 because it seems that they will reach the market in a relatively short period of time.

The third in discord in this market segment, Intel, is also preparing the landing of the first proposals equipped with their new Intel Core accompanied by the Radeon RX Vega M GPU. As we have told you, the Santa Clara company has already presented its new NUC with Radeon RX Vega, which, apparently, will be available throughout next spring.

This announcement allows us to intuit that the first convertibles, laptops and mini-PCs equipped with the new Intel Core with Radeon RX Vega M will reach the market at a date very close to that of its rivals Qualcomm and AMD. It’s time to stay tuned.